SMP have run stand-alone, in-house F.A Level-1 & -2 coaching courses in Brockwell Park, in partnership with the London F.A, since 2010 and have produced over 200 qualified local coaches from Level-1 to UEFA B Licence. Four coaches have gained a bursary through us to take their UEFA B Licence, three of whom passed, including the current joint first team manager of Tooting & Mitcham United F.C., Ashley Bosah.

Participants wishing to enrol on a football coaching course must be aged 16+ and commit to a minimum of 20 hours volunteering with the Project. Due to the new structure of the F.A Level-2 course, we will only be offering a limited number of places on it. The course will no longer be held in-house but all assessments will be made at SMFC training sessions and matches.

Dates for 2021 will be announced as and when the London F.A update us. 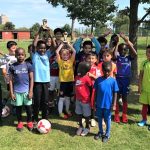